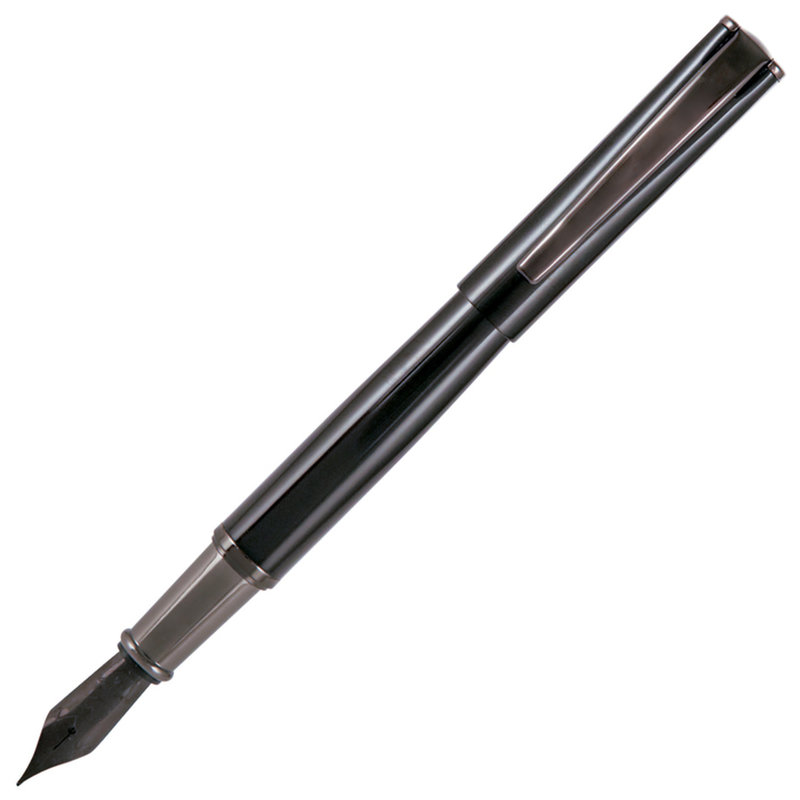 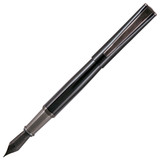 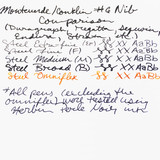 The Monteverde Impressa Fountain Pen Black with Gunmetal Trim is available for order on-line and in-store at Dromgoole's.

The modern design of the Impressa starts at the top of the cap with a perfect square, which then transitions into the round barrel. The sleek clip has a spring action that makes for smooth placement and removal from the pocket. The classic Black option is available with either gun metal or rose gold trim, while the Gun Metal has striking metallic red trim, and the blue is paired with metallic blue trim. Mode choices include Ballpoint, Rollerball, or Fountain Pen with a large flexible nib either in Fine, Medium, Broad, or Stub.

I wanted to make an update to my last review but it's not always something at the top of my mind....

First of all these guys are awesome... They made sure and we calm and willing to walk every step of the way and willing to switch out my spilled ink. Once I cleaned everything up it wasn't bad and decided to save the time as I have a small stockpile.

The pen though.... I've used a converter with Edelstein aaannnddd I've run both the ink cartridges that came with it... After an intense cleaning the flow is somewhat better but this pen feeds very dry. It needs a wet ink looks Monteverde's wettest and I have to store it nib down. Also...I have the "nicer" Monteverde converter and I either got a defective one, or just like the Ritma it doesn't fit in this pen. The cheap, basic one that comes with this pen fits better but it's been my observation that no converter fits well in Monteverde's budget pens... You're better off syringing ink to refill a cartridge if you're planning to carry this pen a lot as it will fit more securely to the feed for at least a few uses if not more

I really like Monteverde's newer jowo nibs but their "Omni flex" leaves something to be desired. With the flow issues sometimes it does what it is supposed to and makes a wide line, sometimes it splits into two small lines (which is my favorite and am trying to figure out how to make permanent), and when the feed is almost dry and you push on it the nib suddenly goes dry.

It's a heavy steel nib that goes against everything you think of about fountain pen nibs. It has a decent medium tip with "normal" pressure but you have to push quite firmly to get it to flex... I'm trying to figure out a way to soften it. I'm guessing you'll have better luck with the more standard nibs. The 3 inks that come with it is what makes this pen a good deal.

Not worth the free ink or the pen I'm sorry to say. I was super looking forward to getting an Omni flex from Monteverde from these guys because they're not easy to find and I like their document black and the nice shade of grey and do I got two and asked for another shade I didn't have just to try....

When my package arrived I was excited....I only have Ritmas so I wanted to see how everything would be. The package is beautiful, and that's where my positives end sadly.

I'm not sure when this pen was made but it looks like an older nib.... The heart shaped breather hole is cute but since it led down to what the box says is a "fine" point but looks more medium my heart sank. No big deal... Mistakes are made.... I'm the kind of person that will usually even go with it because, who knows, maybe the universe is trying to tell me something.... The pen comes with two short cartridges only marked by color, can't tell you which ink line they are.... And it comes with the smaller threaded converter which is a good thing because the bigger Monteverde threaded converter I was told I needed for the Ritma didn't fit either that pen or this one. The grip holding the nib isn't machined properly..... The cap at least has a tight seal....I didn't think it was a snap cap and you have to pull it so hard it feels like you're almost going to break it.... But the grip/nib is so poorly machined that when screwing in the converter I unscrewed the grip hallway.... If you think a twsbi is easy to take apart then you haven't seen this pen.... The things that should be easy like removing the cap almost take a leaver and the things that should be more snug you're not sure if they're even snug or not threaded.

Ooohhhh...I almost forgot.... One of my inks had a small hair fracture on the rim of the bottle and dumped 5-7 ml of document ink.... And that's after they told me the other ink I wanted was out of stock but as of wiring this still says it's available.... But I just moved into this apartment, hard wood floors, and the first thing I open here I have to spend an hour meticulously cleaning to make sure I don't leave an ink stain on the floor.

Inks break in transit, wrong items get picked.... These things happen... But after calling me to "make sure I get a shade I wanted" because what I want is in stock but isn't and then the let down of how cheap this pen feels and the finish looks I just can't do better than two stars.... If they didn't have decent communication it would be one...

I love this store but they really dropped the ball this time and the Ritma is a better pen for a better price.... It's got it's own quirk's but it's a better bang for the buck for sure just by looking at the nibs and see the quality of their craftsmanship in plain 30x jeweler's loupe sight. 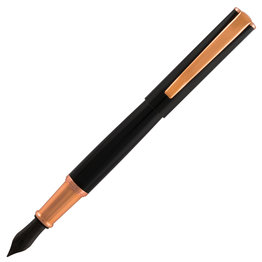 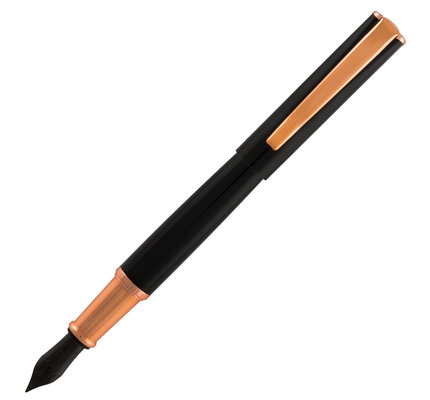 The Monteverde Impressa Fountain Pen Black with Rose Gold Trim is available for order on-line and in-store at Dromgoole's.